Get To Know Your Stock: AT&T Inc.

Most Americans of a certain age know AT&T as American Telephone & Telegraph, the former monopoly that handled nearly all phone calls in the country. The company’s roots trace back to 1877 when Alexander Graham Bell and his financial backers started Bell Telephone Company. AT&T itself was incorporated as a part of Bell in 1885 to provide long distance service, a balky, expensive offering first provided from the U.S. to London via two way radio. Over the course of the years, AT&T developed better technologies until it eventually blanketed the entire country with its services. But in 1974, the US Department of Justice filed an anti-trust lawsuit against the company, and over the course of the following several years, an agreement was reached to break the company up. This consent decree resulted in the formation of seven Regional Bell Operating Companies, also known as the Baby Bells. The Baby Bells provided local calling. AT&T was consigned to providing only long distance service. 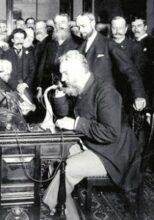 Over time, the Baby Bells experienced unique struggles. Some had enormous geographies to cover, making equipment very expensive. The advent of cell phones and the internet changed the entire business permanently. Competitors popped up, and pricing was difficult. Finally, in an irony, Southwestern Bell (SBC) devised an expansion of its market share by buying its former parent, AT&T. Rebranded as AT&T, the new company later bought BellSouth, another former Baby Bell. This growth did not necessarily bring success, but it also didn’t dissuade the company from attempting to acquire its way out of its financial quagmire. In about 2015, AT&T decided that entertainment was the answer to its woes, and it bought DirecTV. This was followed by an enormously expensive, contested acquisition of Time Warner in 2016.

Things shifted into reverse once again in 2019, when an activist investor insisted that AT&T begin divesting troublesome divisions to enhance shareholder value. In 2021, DirecTV was spun off, and recently, WarnerMedia followed suit. These transactions left AT&T flush with cash, at least part of which will go towards paying down debt. The newly established dividend leaves the stock with a 5% yield, and the company has an opportunity to concentrate on its relatively profitable broadband business.

We like the stock for its fancy dividend yield and the possibility of better pricing power in the near future. Too, at least a partial clean-up of its balance sheet will accrue to the benefit of shareholders.