Posted on 07.15.16 by Michelle Rand in Interest Rates, Investment

For years, we have observed that the vaunted Fed has, at serious inflection points, done nothing more than followed the market. The evidence we’ve collected shows our hunch is on the mark, and that the market generally ‘knows’ ahead of the Fed where rates ought to be, even in the shortest maturities. Of course, there’s something to the ‘jawboning’ theory – the Fed talks a lot before changing rates so the market has a chance to adjust. Still, take a look at the chart below: 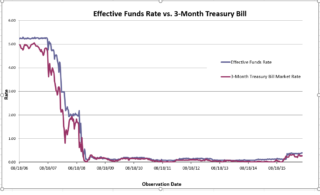 In the critical 2007/08 time frame, a wide gap appears between policy rates and the market. During this time, officials felt that the economy would withstand the decline in real estate prices, and they stubbornly refused to make an adjustment despite falling rates in the bill market which were all but screaming ‘warning!’ Then, as it began to dawn on officials that things could get ugly, policy rates were lowered, but not quickly enough.

In this era of sharp criticism aimed toward the Fed, we note that its meddling in matters of the economy have not always worked. As interest rates head to negative territory all over the world, the US is likely not far behind, and this tidal wave will drown Fed policy. Managing bond portfolios is best done with ears tuned to the market itself, rather than the Fed’s words. The yield curve and yield differentials are excellent communicators; ofttimes, the Fed is just noise.

Have an investment
question? Ask us.